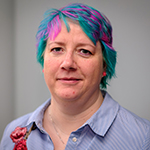 "You're not like other girls" - Redefining leadership by using the soft sides
Katrinebergssalen, Thursday 16:45 - 17:35

Close your eyes and imagine a strong leader. Imagine someone is in charge, taking action. What did you see?

Chances are high it’s not a young woman in ponytail and a dress.

Traditionally, leadership traits have been strongly connected to masculinity: strength, decisiveness, confidence, and ambition while kindness, empathy, and other softer skills have been seen as traits that make you less proficient as a leader. Women rising to leadership positions have often been people showing the more traditional leadership traits, both personality-wise and in how they choose to present themselves via clothes, language and posture. At the same time, women that show those traditional leadership traits are seen in a less positive manner than men with the same type of personality, successfully creating the so called glass ceiling. So. What do women do? They tell themselves they are not like other girls, and they shove the pink dresses into a drawer somewhere.

After talking online for a time, Gitte and Lena met at a café in Stockholm 2018. While talking about our lives we realized that we had a lot of similar experience and had tackled them in similar ways.

We would like to share our stories from being women in the IT-industry for more than 15 years and how we have gone from suppressing our softer sides to embracing them and making them a part of an ever stronger leadership style. We will share examples of problems we have encountered, how we tried to solve them by shutting out parts of ourselves and how we managed to finally accept them, glitter and unicorns included.

Gitte Klitgaard is quite active in the software community, speaking at and organising (un)conferences. Her focus is on agile and she has a huge interest in the people aspects: communication, listening and creating a safe space for people to be themselves. She believes in and helps teams to find joy and purpose at work.