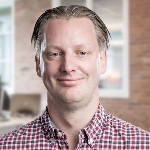 Do you think that you are awesome and longing for work on Sundays or does Sunday evening mean anxiety for a new work week (SMonday)? I believe that we're all awesome in our own way and a big asset to our company and/or customers.

With this talk I am going to help you overcome SMondays and also become even more important to your company and/or customers!

I have worked as a system developer since 2000 and the last ten years a lot with Episerver.

In January 2015 I become EMVP (Episerver Most Valuable Professional) and around that time I also started to work for Episerver as a technical trainer through the company NetRelations where I am hired.

My biggest interest next to Episerver are databases and Microsoft Azure where I was one of the first in the world to deploy a live Episerver site as a real Azure website and that was in September 2014!

I do a lot of blogging that you can find here: http://world.episerver.com/blogs/Henrik-Fransas/