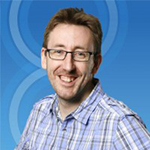 Monitoring is relevant, but mostly only done … after the facts. Azure provides in a lot of good monitoring tools on several levels. Using this correctly and getting a good overview is something you need to learn. This session will explain what the features are out of the box, how to build custom dashboards and how one can use correlated intelligence (and even automate on that). Topics handled are at Azure , OMS , and more …

As a Microsoft Technical Evangelist, Mike is an Azure goto for ISV’s (independent software vendors). He’s been active in the IT industry for more than 20 years and has performed almost all types of job profiles, going from coaching and leading a team to architecting and systems design and training. Today he’s primarily into the Microsoft Cloud Platform and Application Lifecycle Management. He’s not a stranger to both dev and IT Pro topics, they even call him the perfect hybrid solution.

In January 2012 he became a crew member of AZUG, the Belgian Microsoft Azure User Group. As an active member he’s both involved in giving presentations and organizing events (like ITProceed, Techorama and Global Azure Bootcamp aka GAB). Mike was also a Microsoft Azure MVP (awarded 5 times since 2013, received his Fifth in July 2017! ) and Microsoft Azure Advisor.

Helping out in the community and introducing new & young people into the world of Microsoft and technology is also one of his passions.